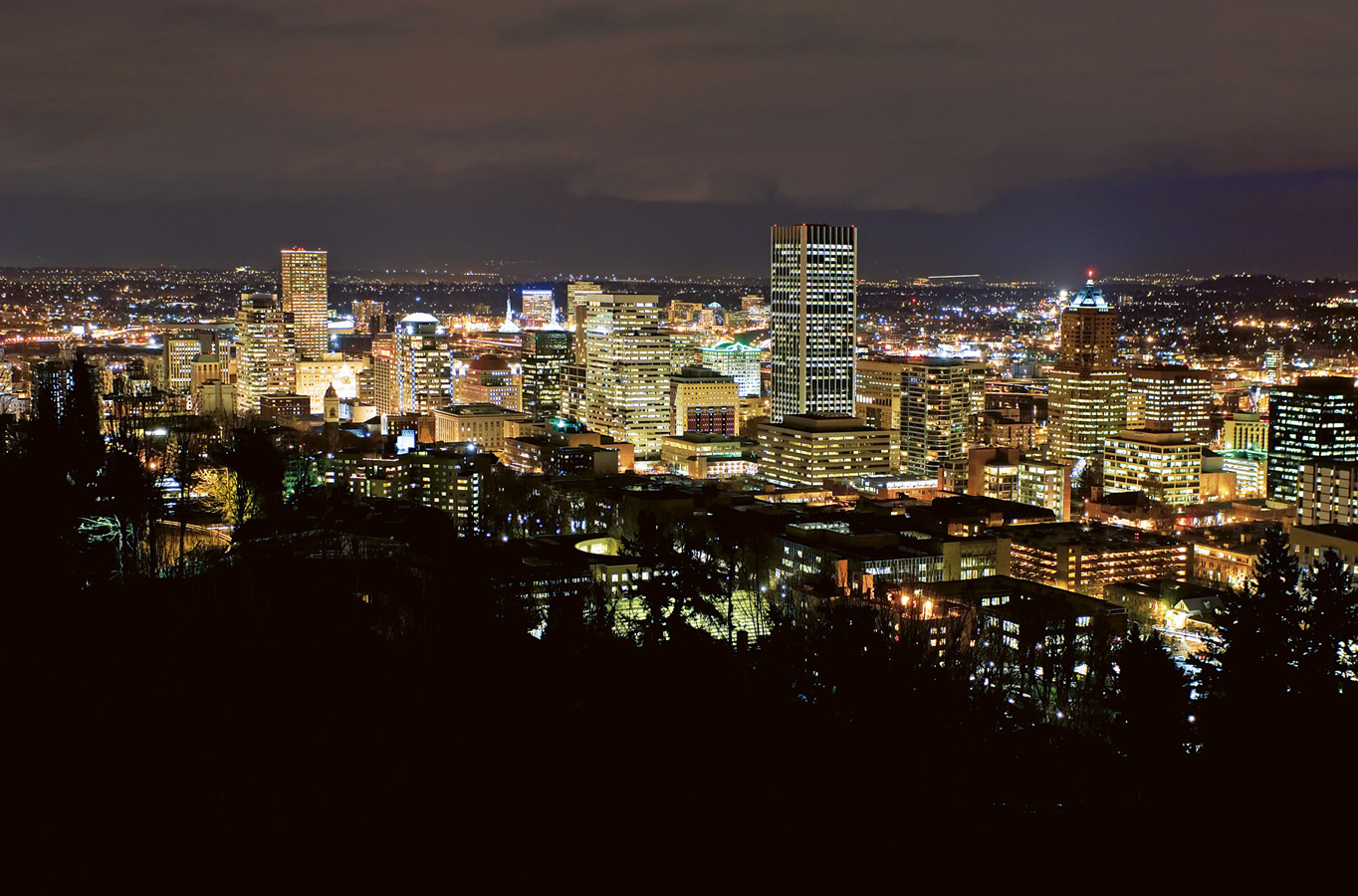 The city of Portland was founded in 1851 and has changed dramatically over the last nearly 170 years. Originally known as a traveler’s resting place called “The Clearing,” Portland is now a bustling hub of shops, art, food, and culture. The city’s Downtown area, which spans north-to-south from Burnside Street to I-405 and west-to-east from I-405 to the Willamette River waterfront, saw three energizing development periods after its initial incorporation: one in the early 1900s, one in the late 1970s/1980s, and one that is currently under way.

After the Lewis and Clark Centennial Exposition in 1905, Portland’s population doubled in just 10 years. This led to the development of many new buildings including the Central Library, the Benson Hotel, the Meier & Frank Building, the U.S. National Bank Building, and the Bronaugh Apartments (one of the earliest modern apartment buildings). In addition, three Willamette bridges were opened by 1920 to improve traffic flow in and out of Downtown.

By the 1970s, residents were flocking to shopping malls outside of the city and the Downtown area became less popular. To bring in more business and increase appeal, Portland created the downtown transit mall, Tom McCall Waterfront Park, Pioneer Square, and the Pioneer Place mall by the end of the 1980s. After this boom, Downtown Portland had 500,000 more square feet of development than on the east side and was once again a central hub for locals and visitors.

Once the 2010s began, the city’s west side saw another surge in commercial real estate development. In fact, since 2015, 57 projects that total more than 5 million square feet of office, retail, hotel, and living space have been completed in the area. By 2021, Portlanders can expect to see another 3+ million SF of new construction as well as more than $400 million spent in building renovations.

With dozens of development projects also being carried out in other areas of Portland, the community can enjoy the opportunity to work, live, shop, and dine in many new and exciting places around the city.

As a report by Clean & Safe PDX says, “Portland has established itself as an attractive niche for creative and tech enterprises. The relatively lower cost of living and, compared to other major West Coast cities, relative housing affordability encourages firms to establish satellite and secondary offices.”

These perks have led to an influx of companies expanding to Portland and have pushed commercial real estate companies to develop and/or renovate 8.8 million SF of new office space and 22.8 million SF of industrial space. In the past few years, companies such as these now have opened offices in Portland:

In fact, according to JLL, 27 percent of Portland metro’s office leasing in 2019 was by tech companies, followed by 25 percent by professional and business services. A few notable commercial real estate deals in the downtown area include Amazon (Broadway Tower) and Google (Meier & Frank building) in 2019, and Square (Aspect building) announced just last month.

While office space has grown in the last few years, so have retail sales. This increase plus upscale residential housing and continued tourism means Portland is on a healthy track for long-term retail growth. In addition to branches of major companies like Starbucks, Target, Adidas, and many others, Portland has been a seedbed for a wide variety of local brands including Pendleton, Olympia Provisions, Columbia Sportswear, Stumptown Coffee, and more.

Portland is one of the top hotel markets in the United States and continues to grow. Since July 2017, the city has added over 3,000 hotel rooms and expects to add around 1,000 more in just the downtown area by 2023. One of the most anticipated projects under construction is the $600 million Block 216 Tower at 900 SW Washington St. The tower will be home to a 250-room Ritz-Carlton, the first in the Pacific Northwest.

With steady occupancy rates, corporation expansions, and a rise in tourist spending, Portland has been a hot spot for the lodging industry. Just last month, a new Hyatt Regency hotel opened across from the Oregon Convention Center; it’s expected to bring in a steady flow of business professionals and boost the city’s economy. This is in addition to several new Downtown hotels including The Porter (completed 2018), the Woodlark (completed 2018), and the Hyatt Centric (completed 01/2020), as well as a number of other projects in the pre-development or construction phase.

While Portland’s commercial real estate boom includes many newly constructed properties, there are also many renovated properties in the mix. Historic buildings like the Portland Power & Light Building, the Meier & Frank Building, and the Portland Building are receiving exterior updates and seismic upgrades while other downtown staples like the Wells Fargo Building, 6th & Main, KOIN Tower, US Bancorp Tower, Pioneer Tower, ODS Tower, PACWEST, and Melvin Mark’s own Columbia Square are getting modern remodels and design revisions.

“We’re especially looking forward to the renovation at Columbia Square,” says Jim Mark, President and CEO of Melvin Mark Companies. “We want to give our tenants and visitors a stylish, inviting lobby with plenty of seating room as well as a great restaurant space with lots of natural light.”

For more information about what’s happening in the Downtown Portland area, check out our Downtown Spotlight blog series. In these three blogs, we map out and expand on all of the developments unfolding in the north, central, and south areas.