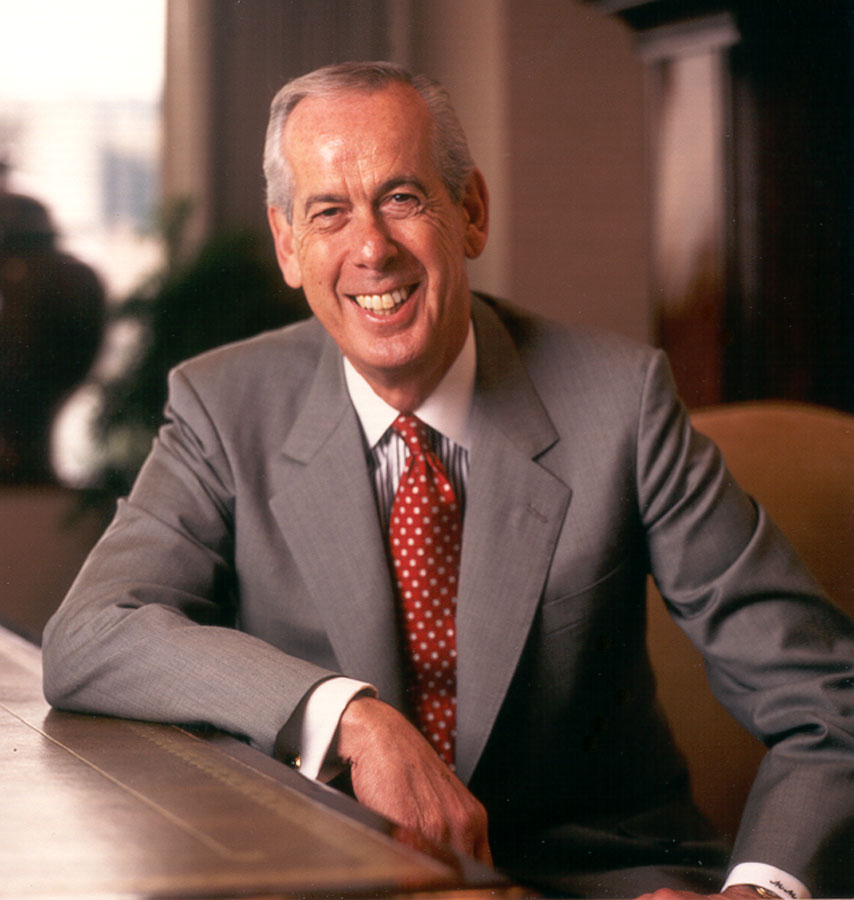 Melvin “Pete” Mark, Jr., a leader in the Portland business and philanthropic community for over sixty years, peacefully passed away on June 1st, at the age of 91.

Pete was an inspirational force for all who knew him. He was a gentleman, champion, leader, father and friend. He counted himself lucky to form a business with his own father, and then watch that business grow and flourish alongside his son and son-in-law, and two grandsons. He treasured his children and grandchildren, and believed that the true wealth of any person is his family.

Born March 27, 1926, he was the youngest of two children of Melvin and Mildred Mark. His sister Lois gave him the nickname “Pete”, insisting that he didn’t look like a “Melvin”. The name stuck and he answered to it the rest of his life. He spent the first thirteen years of his life in Philadelphia before the family moved to New York City in 1940. After graduating from Dewitt Clinton Public High School in 1944, Pete was accepted in the V-5 Naval Aviation Program. He was nearing completion of the program when World War II ended. He graduated from the University of Virginia in 1948, an experience that sparked his lifelong interest in American history. Upon graduation, Pete joined his father in the commercial real estate business in New York City.

Pete had three loves in his life: his family, community and business. The light of Pete’s life was his wife, Mary. He spotted her across a crowded room at a New York City Christmas holiday party in 1950. They had dated briefly four years earlier, and Pete would say that once he saw her again he knew instinctively he was not going to let her get away a second time. Three dates later, he proposed to her beside the fireplace at the famous 21 Club, and they were married on May 3, 1951. Pete and Mary enjoyed 57 years of marriage before her passing in September 2008.

His love affair with Portland began in 1948, when he traveled here to see the Loyalty Building, a real estate property purchased by his father. What was planned as a brief visit became a several months stay, as Pete was amazed by the beauty of the city and the friendliness of its citizens. Pete would bring Mary to Portland as part of an extended honeymoon trip. She, too, fell in love with the city and agreed with Pete to make Portland their home, where Pete would open an office of Melvin Mark Properties, and where he and Mary would raise their three children, Linda, Cindy and Jim. Both Pete and Mary could sense that people in Portland cared about the community and each other, and they wanted to be part of helping the city grow. Throughout Pete’s life, he was personally invested in the business and cultural life of Portland, and felt it was his responsibility to give back to a community that had given him so much.

What Pete began as a one-man office would grow over the years to become the Melvin Mark Companies. Over time the business increased in size and scope adding property investment and management, brokerage, development and financing services. Each time Pete added an area of service it was because he thought they could do it better and more successfully for their clients. Pete regarded tenants and clients as more than real estate transactions; his philosophy was to develop long-term relationships instead, treating people with honesty and respect. His word and handshake meant something. This attitude and philosophy is ingrained in the Melvin Mark Companies culture and with every employee who works there. Pete’s philosophy of doing business has been instrumental in the company being named by the Portland Business Journal among the Most Admired real estate companies in the state.

An enthusiastic and tireless proponent of all things Portland, Pete was one of this community’s most generous and visionary philanthropists. The causes and organizations that Pete and Mary supported over the years are too numerous to mention, but chief among them are Pioneer Courthouse Square, where Pete served as the founding chair of the board; the Portland Art Museum, where Pete and Mary co-chaired three major fundraising campaigns; and the Oregon Historical Society, which has hosted five exhibits featuring Pete’s collection of presidential artifacts and American historical treasures. Pete was very proud of the fact that his children and grandchildren are continuing the Mark family tradition of civic engagement and philanthropy.

Pete will be deeply missed by family and close friends, his Melvin Mark Companies family, and his extended network of partners, colleagues, and community leaders.

More tributes to Pete can be found in the Portland Business Journal and The Oregonian.