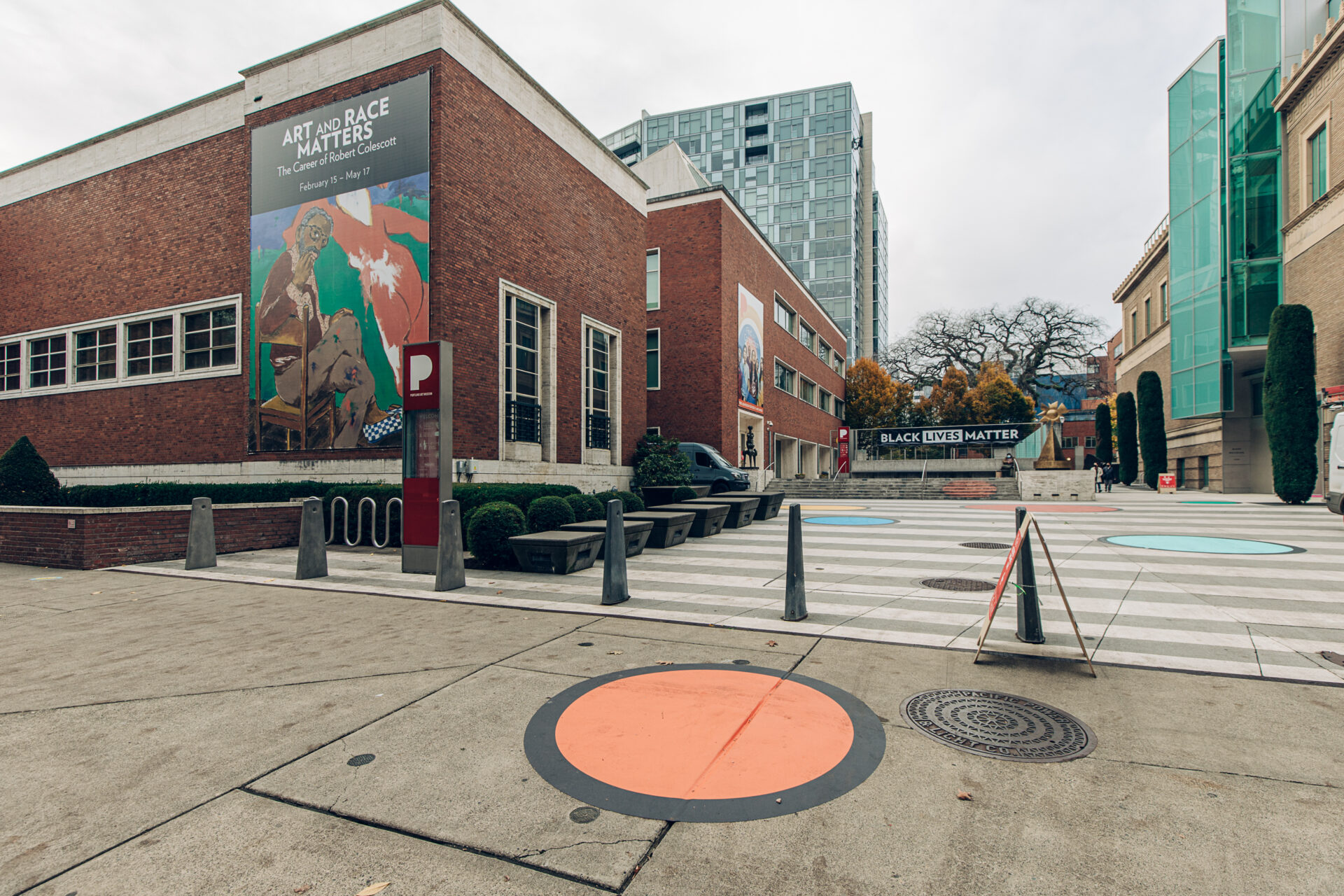 This summer, Pioneer Courthouse Square was transformed into Polka Dot Courthouse Square – a socially distanced public space unlike any other. The colorful art concept created by local artist Bill Will featured large vinyl polka dots spaced twelve feet apart throughout the area. The dots created a playful energy and encouraged locals and visitors to safely interact. They were also the location of pop-up performances by local artists, musicians, writers, singers, dancers, and market vendors.

Polka Dot Courthouse Square was originally set to run through October 15th. However, the project received enthusiasm from the Portland community and has instead grown into a larger installation for the holiday season. Titled Polka Dot Downtown, the design has expanded to feature more than 100 colorful vinyl polka dots throughout downtown Portland, stretching from the Pearl District all the way down to Portland State University. Some notable dot locations include the Portland Art Museum, the Oregon Historical Society, the Ira Keller Fountain, and Melvin Mark’s buildings 2&Taylor and Union Bank.

The dots will continue to feature pop-up live performances by both individuals and groups to showcase local talent and bring a positive energy to the area.

Melvin Mark broker Paul Andrews is a member of the Pioneer Courthouse Square Executive Committee and was one of the individuals who helped with the expansion. In an article by The Oregonian, he explains the strength behind the dot design: “This project sounds simple but it’s extremely powerful. Today the Dots help energize downtown Portland, bring us together, and brighten up the city.”

Known affectionately as Portland’s “living room,” Pioneer Courthouse Square and its variety of community events have a history of enlivening the downtown area. When the city faced turmoil and hardship in the 1970s and ‘80s, the downtown business community formed a concept to help reinvigorate it: a public, open space that would span an entire city block and encourage locals and visitors to gather together. When the square opened in 1984 it became an immediate staple in the community and, to this day, an important part of Portland’s downtown story. To learn more about its history from Andrews and others, watch this short clip.

This year has undoubtedly brought its own turmoil and hardship to Portland and like it was back then, Downtown is in need of engagement and energy from the community. This holiday season, we encourage you to shop local and support small businesses in the downtown area. And while you do so, be on the lookout for a live performance at one of the many colorful polka dots that make up Polka Dot Downtown.

Oregon artist Bill Will has been creating sculptures, museum installations, public art projects, and studio work for 46 years. His work often incorporates humor to address social and political issues and features “mundane materials” such as pennies or bowling balls meant to conceptualize human behavior. Currently he is a professor emeritus at the Oregon College of Art and Craft in Portland.